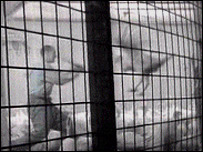 Staff were caught on camera playing “bat and ball” with turkeys

Food firm Bernard Matthews has spoken of its horror at the actions of two of its staff who were caught on camera playing “bat and ball” with turkeys.

It has suspended six workers and warned dismissals and prosecutions may follow.

The incident took place at one of the 20 vast turkey sheds at Beck Farm in Felthorpe, near Norwich in Norfolk on Friday morning.

The secretly-filmed video of the “game” was released to the media by animal rights activists.

The cameraman was getting pictures for the Hillside Animal Sanctuary at Frettenham, Norfolk, which has been investigating factory-farming practices for 11 years.”

» More coverage plus links on the Vegan Worldwide News Blog