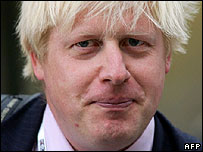 That luvvable buffoon is at it again.
At the Tory Party Conference Boris Johnson had a go at Jamie Oliver and the government’s healthier school dinners.

But BBC South political editor Peter Henley reported Mr Johnson had taken a swipe at Mr Oliver’s school dinners campaign at a Monday evening fringe event, saying “if I was in charge I would get rid of Jamie Oliver and tell people to eat what they like”.

The MP stood up for mothers who helped their children avoid healthier options, reported our correspondent.

Mr Johnson added: “I say let people eat what they like. Why shouldn’t they push pies through the railings?”.

The father-of-four, who is a Conservative spokesman on education, added: “I would ban sweets from school – but this pressure to bring in healthy food is too much.”

He later said he had been misquoted, adding: “What I said was `let them eat liver and bacon’.”

More idiocy from the fop here and here.